Dear Stephen and all,


I have a question concerning my friend’s daughter. She is a Spanish 11 year old girl. She has been diagnosed with a grade IV medular glioma. She had surgery, but the tumor could not be removed. They just took a biopsy. She has had 30 sessions of radiation and 27 days of temozolomide. Parents are desperatly looking for possible clinical trials that would fit her case. Any suggestions on specific treatments or cocktails would be of much help as well. Even though they live in Spain they would have no problem travelling overseas. We are attaching pathological report, MRI and tractography report.
Please click on the following link.  Once the link takes you to the page of the girl's medical information, click on "Visualizar el estudio" to see her images and "Descargar el informe" to read the medical report:
http://resultados.healthtime.es/PortalPaciente/OpenSharedStudyRequest/a4ac550a-19f7-4d58-99ad-6e1fb2e06ccb
The picture I am including is the report of the pathologist.  It is in Spanish, but I think it is understandable.  If you have any questions, please contact me. 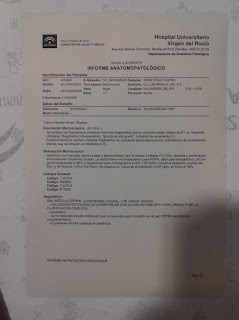 Thank you all in advance.
Isabel

Overall he has been doing ok with the treatment. The only set back was when he had around 3 to 4 multiple grand mal seizures around 30th June 2019. We had no warning about that seizure and our medical team didn't warn us that he could get seizures from the radiation swelling 4 weeks post radiation (we thought maybe just during radiation treatment). He had no side effects during radiation treatment period itself - we were shocked that it happened -

Question 1: Seizures post radiation 4 weeks after radiation
I guess it is a "normal" side effect? We thought seizures would be a side effect later on when the treatment might stop working. The hospital put him into an induce coma for 2 days to stop the seizures. He took steroids for about 6 weeks after and has come off the steroids now and has had no further seizures. We are also surprised that nobody ever mentioned to us to have buccal midazolam injection at hand as when we called the ambulance, the paramedics had to call the fire brigade for an advance paramedic to inject IV anti seizure drug. If we had the buccal midazolam this might have prevented the multiple seizures. He now carries the buccal midazolam injections around.

Question 2: Foot twitching post seizure, same side as tumor
His Keppra was 2 x 500mg up until then and now they have increased it to 2.5g per day and added Phenytoin. Since that seizure he has had a foot twitch during the night and a sore pain in his thumb - can be normal effects from the swelling and tumor? The tumor is on the left side and the twitch is on the left side which is unusual? The doctors would expect the tumor to effect the right side.

Question 3: Celebrex
I read the Brain Tumor Charity do not support taking Celebrex and some articles says it is not good to take, what is the opinion about it now given the new clinical trail data? Also it seems like it can react with Epainutin (Phenytoin) so we give it to him in the evening. - https://www.thebraintumourcharity.org/brain-tumour-diagnosis-treatment/treating-brain-tumours/treatments-licensed-other-illnesses/celecoxib-celebrex/

Question 4: Daily timetable of cocktail
Do people have a daily timetable to avoid interactions between anti-seizure drugs and others?

Question 5: Disulfiram
We have disulfiram but we have never given it to him as it seems to interact with the Epanutin (Phenytoin). Have people taken this together?

Question 6: Curcumin
He is taking Doctors Best High absorption Curcumin with C3 Complex and Bioperin 1000 mg. This tablet he finds hard to digest because it is very big and solid even using a tablet cutter. Is there a different brand which people recommend which is easier to take?

Question 7: Reishi
He is taking Reishi as part of a multi-mushroom supplement for Brain function called Fungi Perfecti, MycoBotanicals for the Brain. However we read on Sloan Kettering that reishi is not good to take?
https://www.mskcc.org/cancer-care/integrative-medicine/herbs/reishi-mushroom

Question 8: Ranitidine in absence Cimetidine
He is taking Ranitidine as we could not get cimetidine. We asked a friend in Spain to get the cimetidine but they got us cinitaprida normon? It is for treating stomach ulcers but I guess its totally different as it doesn't appear to be a H2 antihistamine. We were not sure if it was any use giving it to my dad? We have not given him the Cinitaprida normon but we give him 75mg Ranitidine a day.

Question 9: Mebendazole
He is taking Mebendazole 100mg daily - i know its well below the dosages a human would need to take compared to the mouse study? Do people take much higher doses? The studies do not seem clear about it but I know it is used in Care Oncology alot?

Question 10: Antibiotics Doxycycline/Minocycline
Antibiotics – he was only on these when during radiochemo phase but not now…Care oncology seems to recommend doxycycline and a rotation with other antibiotics such as minocycline? Should he start taking this too? How much do people take, do people rotate each month? Surely antibiotics will cancel out the effects of building up the immune system?

Question 11: Valacyclovir and other antiviral drugs?
Should we look into taking Valacyclovir? (I know there is no right or wrong cocktail). If so, how do people get this, how long do they take it for? We read somewhere that people can get tested for different virus's in their system such as Herpes? Is there a test for CMV? Is there any other herpes/CMV drugs we should take?

Question 13: Vitamin C IV
I read up on Vitamin C IV and I don't know if we should try that - it doesn't seem clear if it is effective or not and it doesn't mention it could flush out the anti-seizure drugs?? Those studies mention N-acetyl cysteine reverses the benefits of IV Vit C??

Question 15: Other Repurpose drugs
Interesting article with a few extra repurpose drugs which I have not mentioned above. Not too familar with them and the cocktail?
https://www.canceractive.com/article/repurposing-old-off-patent-drugs-as-new-and-effective-cancer-treatments

- We could not get Tagamet (cimetidine), so we were using Ranitidine, another Histamine H2 receptor (usually used for stomach uclers - repurpose of Cimetidine is immune, anti invasion. We do not know if Ranitidine is a good replacement but apparently cimetidine can interact with Celebrex, but I think Ranitidine has reduce side effects to Tagamet). - we have not restarted Ranitidine yet

Supplements: Majority of these we get from iherb apart from the coriolus versicolor which we order from evitamins.

Stopped taking - should we take again?
- NAC N-acetyl cysteine– I noticed Cheryl Broyle was taking this but it is not on Stephen’s cocktail list.
- L-Tyrosine 500mg – I did not see this on any cocktail list but it is an amino acid which is meant to help with brain function.

Never started this but should we after the seizure? Can it interfere?:

- Disulfiram and he has not started this.
Posted by Rhubarb at 12:34 3 comments:

I'm hoping to interact with those who have needed to stay on Dex long-term at low levels (2mgs or less) or hear from experts on the topic.

My Uncle was on very high levels for many months but we've not gotten him down to 2mgs and it seems that going lower is not an option to do - safely. He had regrowth immediately after surgery, that said he's got tumors in his head taking up space, and also at this point his adrenals are shot.

I imagine that just like any drugs the lower the level, the less detrimental they are.

Is anyone on 2mgs or less - indefinitely?

My mom has demention because of hydrocephalus, as well as, probably, in connection with radiation therapy. Today she will have a shunt. However, we need to treat the consequences. One person said that in England in this case they use hbot.
Questions:

1) can hbot cause glioblastoma progression? I read that this procedure improves blood supply, because the tumor is usually well supplied with blood vessels and blood supply could it make worse? Or is it incoherent things? We are currently taking Avastin.

2) could hbot really help with demention? Any experience?

3) could you please advise other good methods to treat demention and consequences of radiation therapy? Cbd oil, lions mane, ps100?
Thank you!
Posted by Irina at 00:22 4 comments: