That is the name of a letter published online yesterday in Neuro-Oncology journal.  Click on link to the partial extract here.

I'll be uploading the full one-page letter to the Library.  Immunotherapy folder, Immune checkpoint inhibitors subfolder.
Posted by Stephen W at 12:37 No comments:

Has anyone purchased cannabis oil in the US? I looked up the shop in CA ( from the link provided here) but was a bit confused as to which kind to buy and the logistics of it. Would it even be possible to order and have it sent to us? We live in New Jersey, so I wonder if anyone had any luck buying it on the East Coast? Thanks!
Posted by Olga at 16:07 7 comments:

Email ThisBlogThis!Share to TwitterShare to FacebookShare to Pinterest
Labels: cannabinoids_THC_CBD

I found this link on ABTA and thought it was helpful.

http://www.cancerresearch.org/cancer-immunotherapy/impacting-all-cancers/brain-cancer
Posted by AGM at 08:34 No comments:

Found this interesting.  A couple of neurosurgeons at Johns Hopkins were having an open Q and A about brain tumors this past week.  I asked a simple question about combo therapy and got the below response.  I guess this response should be expected though so not all that surprising. 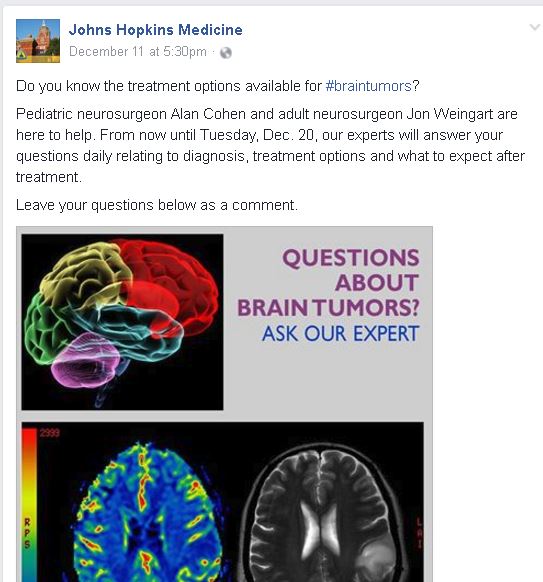 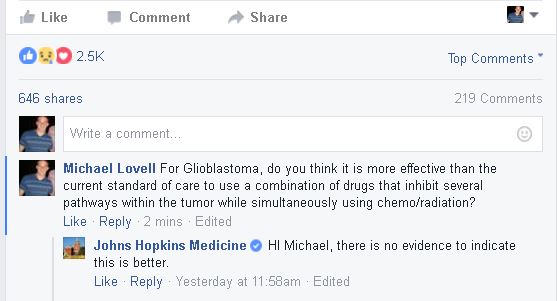 Email ThisBlogThis!Share to TwitterShare to FacebookShare to Pinterest
Dear all,
my 17-year old son will finish RT and temodar on December 28th and we are planning to go to Van Gool's clinic in mid January for the dendric vaccine. In the meantime, I would appreciate advice on supplements for him to take in the meantime. Currently the only one he can tolerate is melatonin, but my hope is that he can do much more once he is off temodar and radiation.  If you could include the dosage that would be great! He is about 140 lb. ( 63 kg.)
Thanks!!!!!
Posted by Olga at 11:42 2 comments:

Email ThisBlogThis!Share to TwitterShare to FacebookShare to Pinterest
Labels: introductions

I initially dismissed the idea of using the Optune device because the OS for rGBM in the EF-11 trial (as shown on the Optune website) was only 6.6 months vs. 6 months using chemotherapy.

However, since reading the PRiDe (Patient Registry Data) analysis (and Stephen's summary on astrocytomaoptions.com) of Optune users I'm becomming more optimistic. The PRiDe analysis is based on a separate database of 457 patients using Optune outside of clinical trials. The PRiDe analysys parses patient data by the number of recurrences and indicates an OS for patients at first recurrence  of 20 months (from the time of recurrence).

The source of this comes directly from the  PRiDe study:

The table indicates that Optune works substantially better for 1st recurrence patients than for patients with 2 or more recurrences.

The source of this is also shown within the PRiDe study:

It was pointed out to me that there are some flaws with the PRiDe data:

1. The research was based on patients outside of a clinical trial, so these patients may have used additional treatments.

2. The OS of 20 months comes from limited follow through data in that the 20 month OS is really based on the average of a range of 14 months to 26 months from the Kaplan-Meier data. I’m a little ignorant when it comes to Kaplan-Meier data, but somehow they use averages when there is insufficient follow-up data . It was explained to me that the 20 month OS is likely overstating the true OS, but it can still be concluded that the OS for first recurrence using the Optune (and possibly additional treatments) was at least 14 months.

So my understanding of the data is that patients using the Optune at first recurrence would have an expectecd OS (from recurrence) of closer to 14 months than the 6.6 months from the EF-11 study.

The PriDe paper is in the library that Stephen W put together.

Email ThisBlogThis!Share to TwitterShare to FacebookShare to Pinterest
Labels: optune_novocure

I was made aware of this through a blog contributor and figured others out there might be interested.

The event is called "Treating Cancer with Cannabis"

Therapy of Glioblastoma Multiforme Improved by the Antimutagenic Chloroquine

Methods: In a prospective controlled randomized trial, 18 patients with GBM underwent standard treatment with surgery, chemotherapy, and radiotherapy; nine received an additional 150-mg dose of chloroquine daily starting 1 day after surgery and continued through the observation period. Nine matched patients were included as controls. Neuroimaging studies and clinical response were periodically compared. The follow-up period ranged from 24 to 50 months. Survival time was defined as the main outcome measure.

Results: Survival was significantly longer in chloroquine-treated patients than in controls (33 ± 5 and 11 ± 2 months, respectively [p < 0.0002]). At the end of the observation period, four patients (46%) treated with chloroquine were alive, two had evidence of tumor remission after 2 years; in another two, tumor recurrence developed after 2 and 4 years of remission, respectively. No control patient survived more than 22 months after surgery.

Conclusions: Chronic administration of chloroquine greatly enhanced the response of GBM to antineoplastic treatment. Because the cytotoxicity of chloroquine on malignant cells is negligible, these favorable results appear mediated by its strong antimutagenic effect that precludes the appearance of resistant clones during radiotherapy and chemotherapy.

Email ThisBlogThis!Share to TwitterShare to FacebookShare to Pinterest
Labels: chloroquine

What are your thoughts on immunotherapy to prevent GBM recurrence?

If the IDH1 tumor my girlfriend has is currently in complete remission, would it be fruitless to discuss with oncologist to enter a trial to take checkpoint inhibitors (like Yervoy and Opdivo) to prevent recurrence or to kill remaining cells that may not be seen via MRI?
Posted by Unknown at 04:13 3 comments:

With 'ObamaCare' potentially under threat in the new administration we are considering changing insurance companies.  We think that the opportunity to get the best insurance for GBM coverage while the pre-existing condition coverage is intact may be smart.

We have private insurance so any company is on the table.

What are peoples experiences with this.  Is there an insurance company know to be the best for coverage?

Email ThisBlogThis!Share to TwitterShare to FacebookShare to Pinterest
Labels: insurance

My sister stopped taking metformin as she could not tolerate its side effects. She complained from severe nausea, dizziness, and fatigue. Anyone knows some tricks to overcome this problem?

She currently is on Temodar, Keppra, Vitamin D3, Curcumin, and Memantine.

Email ThisBlogThis!Share to TwitterShare to FacebookShare to Pinterest
Labels: metformin

Sorry for the delay in replying about the Avastin causing more tumors.  For some reason, I can't get that posting to accept this reply to SteveMPFP so I'll start a new thread.   First, an update...

I've decided to go off of chemo until Jan 7. The Avastin was making me have chemo brain and neuropathy and I decided I simply don't want to live that way. Plus, this recent information out about Avastin promoting the formation of new, "satellite" tumors really hit home. While I was pleased that the Avastin took care of my swelling, I did, indeed, get a new tumor while on it. I told my new NO that we have never really given the supplements, especially the CO (cannabis oils), a fair chance because I've always been on a chemo at the same time. Avastin, for example, somewhat shuts down the blood brain barrier as these publications attest. He agreed I could give the supplements and CO a fair shot. It's a bit scary.

He wants me to consider Optune, the non-chemical therapy that sends electrical fields into the brain. For those who are new to this, these fields interrupt cell division by forcing the cells' microtubule subunits to align to the electrical grid and since it's only tumor cells that are dividing, the normal brain cells are unaffected, so the theory goes. I have already started the process of getting approved.

But a thought occurs...would Optune not also interfere with supplements? If they cross the blood brain barrier in any sort of a polar form, with any sort of an ionic bent or even an R-group that is even slightly positive or negative, wouldn't the molecules' conformation be affected by an electrical field just like the cells' microtubules are? Your thoughts?
Posted by SJFirinne at 09:18 7 comments:

I kindly ask for advices regarding Vitamins/Meds I could give my dad. I am new to all of this, doing my best by reading studies and this blog. My dad had surgery on August 3rd, diagnosed on August 18th. We live in São Paulo-Brazil and there are no clinical trials here and a bunch of other stuff available in the US/Europe. Which makes my situation a little harder but we plan to travel for vacation to the US in January so maybe then I can buy some meds/vits. His tumor is on the right frontal lobe. He's doing great, no side effects, no after effects whatsoever. Still working, going to the gym, golfing and playing tennis. He's 1,75m and 87kg.

So long story short:
He had pulmonary embolism after surgery which postponed the beginning of his cancer treatment
IMRT began on October 3rd with Temodar.
Temodar 42 days-cycle ended on November 13th - 145mg/daily
IMRT ended on November 17th - total of 6000cGy (there were a few holidays in-between)

Currently he is on a pause from his cancer treatment, MRI scheduled for this Friday (high hopes everything is fine!). His onco explained us last week that from now on he is going to be on a 5 days on / 23 days off of Temodar cycle for the next six months, starting on December 17th.
First cycle with 300mg, from second cycle on 400mg.

Although I know this is the standard protocol, I feel like there are more stuff I can do for him.

Once he starts the next chemo cycle, onco told him to take Trimethoprim/sulfamethoxazole 3x/week also for six months.


Is there anything I can give him to make him better? Am I missing something? What else could I do for him?
I accept every advice and suggestion, I'm kinda lost and blind here but always hoping for the best.

Today is his 61st Birthday.
Happy birthday dad! We love you so much!

Thank you for being the best support system anyone could've asked for!
My heart goes out to every and each of you!
Posted by DMG at 04:40 6 comments:

I'm looking for some suggestions on ingredients to add to my wife's cocktail while on PCV chemo for a grade 2+ oligodendroglioma (large and inoperable). The treatment might be followed by proton radiation if deemed necessary.

Currently she is taking the following daily:

She also plans to do water fasting for the first five days of each cycle while taking the Lomustine.

We would of course like to make this treatment as effective as possible so if someone has some recommendations I would much appreciate it.

Many thanks
Peter
Posted by PeterL at 02:02 4 comments:

Email ThisBlogThis!Share to TwitterShare to FacebookShare to Pinterest
Labels: cocktails_grade_2

I don't recall seeing a mouse study this successful before.  This study utilized the orthotopic, syngeneic GL-261 mouse glioma model.  Triple combination of PD-1 antibody, TIM-3 antibody, and stereotactic radiosurgery led to 100% mouse survival at day 100, while all untreated control mice were dead by day 30.  Furthermore, the "cured" mice were completely resistant to new tumor formation when re-challenged with glioma cells.  I'll upload this study to the Library, in the Immunology and Immunotherapy folder, Checkpoint inhibitor subfolder. 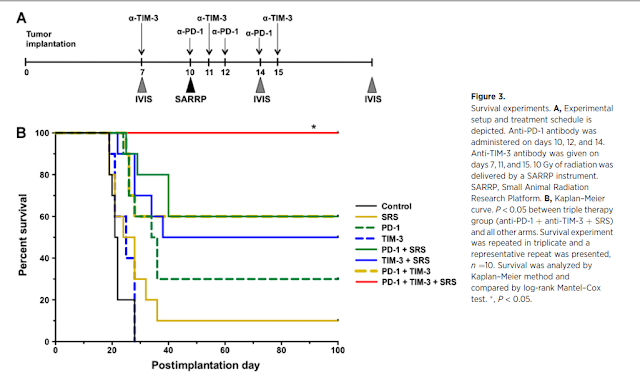 It occurred to me that we need a listing of preferred institutions and doctors by general area.  I'll start with a few suggestions of my own, but please add your nominees in the comments and I'll edit the list accordingly.  Once we get a good list going, I'll make a page out of it for easy reference at the top of the blog.

Avastin Aids in the Formation of Satellite Tumors?

I have had a new tumor form, still small thankfully, since going on Avastin.  The research is still preliminary but if it turns out to be correct, this would obviously be very disturbing.

I am curious...how many of you have had the same thing happen?
Posted by SJFirinne at 10:52 4 comments: