This upcoming trial in France is comparable to the Toca511/TocaFC trials in the US, in that it uses a viral vector to transmit a "suicide gene" to tumor cells that cause them to convert 5-fluorocytosine into the chemotherapy drug 5-fluorouracil.  The virus used in this trial, TG6002, is also oncolytic, meaning that it can kill tumor cells, even without the suicide gene + prodrug component.

More information on the lab studies with this therapy can be found here.
Posted by Stephen W at 16:07 No comments:

Here's the lowdown  http://bit.ly/2ytabTe
Posted by SoDoWarts at 12:12 No comments:

A reader of this blog kindly directed my attention to this breaking news, the first results of the phase III NOA-9 trial in Germany testing the combination of TMZ with CCNU (lomustine) for newly diagnosed MGMT-methylated glioblastoma.

"The mean median survival time in patients receiving CCNU was 46.9 months compared to 30.4 months in the control group with monochemotherapy."

The "mean" in the Google translation of the German language news report actually refers to the median (mittlere), as confirmed at the SNO 2017 presentation.

Although this was small for a phase 3 trial (only ~140 patients), a gain in median survival of over 16 months is unprecendented.

This will undoubtedly become the new standard of care for MGMT-methylated GBM.

Psilocybin and end of life care

I'm aware that (like cannabis) psilocybin is illegal in most countries.  Psilocybin being the active ingredient in hallucinogenic magic mushrooms.  However, I've just became aware of an increasing body of literature (this research has really exploded since 2016) on the investigation of psilocybin for depression and anxiety, including studies on its use in terminal cancer patients.

There seems to have been an entire issue of the Journal of  Psychopharmacology (December 2016) devoted to this with original research papers:

"Psilocybin produces substantial and sustained decreases in depression and anxiety in patients with life-threatening cancer: A randomized double-blind trial."

"The role of psychedelics in palliative care reconsidered: A case for psilocybin"

"Psilocybin for depression and anxiety associated with life-threatening illnesses."

"Psilocybin in end of life care: Implications for further research."

"Psilocybin for anxiety and depression in cancer care? Lessons from the past and prospects for the future."

This should be of considerable interest to the cancer care-giving community.  I plan on thoroughly reviewing this literature and writing more about it in the future.

Email ThisBlogThis!Share to TwitterShare to FacebookShare to Pinterest
Labels: psilocybin_palliative_use

Hi,
my dad has just had his fourth MRI since being on methadone and it was very positive again. This time the tumor is stable but as the three MRIs before this one showed shrinkage, his tumor is now smaller than it was in the beginning. The latest MRI also showed that the edeme is decreasing in size. So we're happy :)
My dad was diagnosed in December 2015 with an inoperable glioblastoma (corpus callosum) and all doctors (neurosurgeon, oncologist, GP) are very pleased with the results. He's not using methadone alone but we've notived an improvement since he started taking it. He also takes Temodar, some other supplements and uses Optune TTF. So it might be the combination that helps him. I'll keep you updated on our experiences with methadone!
Posted by Steffi at 07:22 1 comment:

This was a preclinical study tested in mice, but is an exciting development, as this CAR T-cell cocktail approach is more likely to be effective than CAR T-cells targeted to a single antigen.

I'll upload the full study to the Library (Immunology and Immunotherapy folder, in a new CAR T-cell subfolder).
Posted by Stephen W at 12:04 No comments:

The study is called Clonal expansion and epigenetic reprogramming following deletion or amplification of mutant IDH1.  View abstract here.  I've also uploaded this to the Brain Tumor Library, Pathology folder, IDH-mutant glioma subfolder.  This data was presented at the SNO conference in Phoenix last year.  I'll be following up with comments, and perhaps an Astrocytoma Options update on this.
Posted by Stephen W at 07:20 10 comments:

Has anyone tried this combo?
Best wishes to all
Brainbutton

My husband's genetic testing came back with a .51 Tumor Mutational Burden. He has a 66.40% TP53 Allelic Fraction and 45.76% PTEN. His NO said these are common in many cancers and said neither are very actionable.

He was intrigued by the FIG-ROS1 as it usually shows up in small cell lung cancer and with recurrence might be eligible for a bucket trial with entrectinib.

He also has CDKN2A and CDKN2B Copy Loss.

I am just starting to look into what all this means. I have not looked into clinical trials much but am pursuing possibly getting a PD1 Inhibitor although once again I am told he needs recurrence.

He is 7 months out, stopped adjuvant TMZ after 2 rounds, unmethylated, IDH Wildtype, doing Optune, supplements and cannabis oil and overall doing very very well. Thanks.
Posted by Unknown at 20:27 4 comments:

Suggestions for a Cocktail that does not include TMZ

Hello, my husband has stopped taking TMZ after 2 adjuvant rounds after having debilitating fatigue, dizziness and nausea. He is doing much much better. He is unmethylated and IDH Wildtype. When he was taking the TMZ he did take disulfiram and copper. He is also taking metformin and celecoxib. I know some of these drugs are meant to help the TMZ do what they are supposed to do. Does anyone have suggestions on what off-label drugs he should take if not taking TMZ?

He is taking the standard supplements as well as cannabis oil and wearing the Optune. Thanks.
Posted by Unknown at 20:11 3 comments:

Treatment Options for Glioblastoma and Other Gliomas - 2017 edition

This is the in-depth summary of treatment options that Ben Williams began years ago, and which I have taken over lately.  Download the 2017 update over at virtualtrials.com  , or click here for PDF download.   This can be discussed on Al Musella's BrainTumorTreatments yahoo group .  (Of course comments welcome here as well).
Posted by Stephen W at 08:33 3 comments:

Partner due to have first vaccine as part of Duke Elevate trial on Wednesday.  He went through SOC and had 1st five day Temodar.  Duke said MRI two weeks after final radiation showed pseudo progression with swelling.  My question is does swelling eventually go down without steroids?  Symptoms have gotten worse in last week.  Concerned steroids might not fit with immunotherapy.  Haven't talked to doctor yet.
Posted by Unknown at 12:18 5 comments:

The Blood-brain barrier (BBB) and glioblastoma, a review

Another review appearing online as an accepted manuscript for Neuro-Oncology, on a tremendously important topic.  It's called "Is the blood-brain barrier really disrupted in all glioblastomas? – A critical assessment of existing clinical data" and shares my view:

"This review provides an overview of the clinical literature to support a central hypothesis: that all GBM patients have tumor regions with an intact BBB, and cure for GBM will only be possible if these regions of tumor are adequately treated"

Abstract here, and again I can email the full study if anyone would like a copy.

Combined with the surgical experience, these data support our central contention that all GBM have a clinically significant tumor burden ‘protected’ by an intact BBB.

Accepting the importance of drug distribution across an intact BBB into brain is a critical first step in developing effective therapies for GBM and must be a key consideration in any clinical trial design for newly diagnosed or recurrent GBM.

Email ThisBlogThis!Share to TwitterShare to FacebookShare to Pinterest
Labels: blood-brain_barrier

The impact of complete resection most important for IDH-mut astrocytoma

There is an important new study, just published as an early preliminary manuscript online in Neuro-Oncology, called "The impact of surgery in molecularly defined low-grade glioma: an
integrated clinical, radiological and molecular analysis".  This was a large retrospective study including 228 adult low-grade glioma patients undergoing resection since 2003.  The tumors were classed as A) IDH-mutant oligodendroglioma (with complete 1p/19q codeletion),  B) IDH-mutant astrocytoma (no 1p/19q codeletion) and C) IDH wild-type (GBM-like).

The most important finding of this study was that complete resection (0 residual tumor), was most critical in the IDH-mutant astrocytoma group, as seen in the following figures.  In the first figure shown below, even a small amount of residual tumor post-resection negatively affected survival for IDH-mutant low grade astrocytoma. 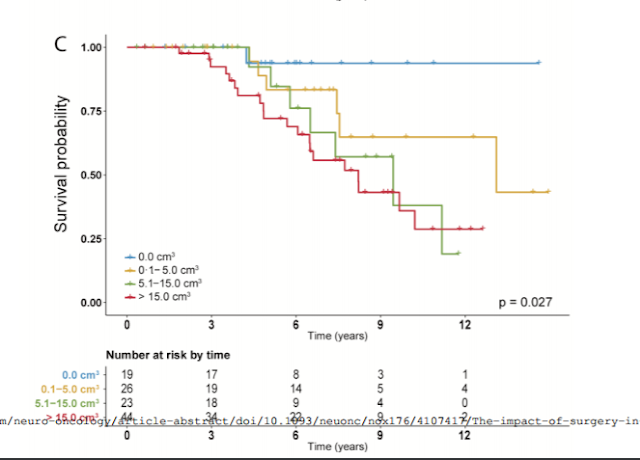 The next figure also shows outcomes for IDH-mutant low grade astrocytoma, by various amounts of residual tumor post-resection.  (My snip only shows the first 3 images in the series).

The next figure shows that complete resection also improves survival in low grade IDH-mutant oligodendroglioma, but the difference in survival between 0 residual tumor and small amounts of residual tumor is not a large as for the astrocytoma group as we saw in the first figure. 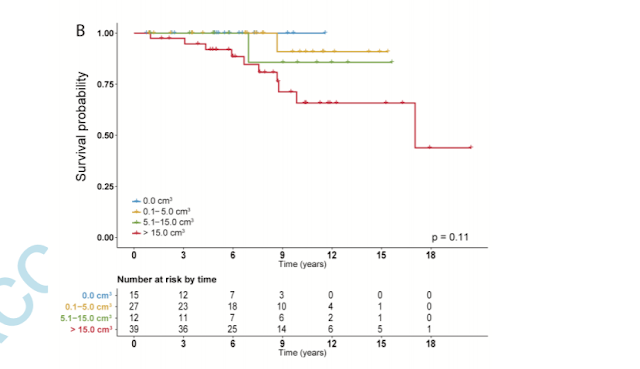 The abstract is available here.  I can email the full study if anyone wants it.

Hi all, my brother diagnosed with gbm last year april 2016 and got his surgery, radiation and temodal immediately after that. This year around feb 2017 during his 3months mri checkup the doctor noted a 0.75cm mass suspected as gbm. Bc its too small the doctor decided to wait for next mri to see how it goes. At may 2017 my bro undergo another mri and found out it was clear! But at next mri aug 2017 they found the 'dissapeared' mass to have grown to 1.4cm. The doctor have decided that it must be gbm recurrence, and he said that the missing mass in between these mri must be the gbm 'hiding'. Is it really possible gbm to be 'missed' during mri?

And we also really confused to the best solution in handling this 'possible gbm recurrence'. We have asked diff doctors including neurosurgeons and oncologists. Doctor A said we should go with gamma knife, Doctor B said we should go with Surgery instead cause Gamma knife wont guaranteed as clear as Surgery. Doctor C said Surgery is dangerous cause the mass is in a critical location that can 'paralyzed', and Gamma knife not effective so we should go with Cyberknife instead. Anyone who have experienced gamma or cyber which one is actually more effective for gbm? And for gamma knife do the patient need to undergo chemotherapy after the gamma knife operation like using Avastin? Or they can only wait for the gamma to works? We really appreacite any recommendations or sharing of experience. Thank you!

In case you haven't seen this news light up the GBM community -- http://blogs.sciencemag.org/pipeline/archives/2017/09/06/repurposing-zika
Posted by SoDoWarts at 06:37 5 comments:

Email ThisBlogThis!Share to TwitterShare to FacebookShare to Pinterest
Labels: Oncolytic_Virus_Therapies

Dear all,
My son is currently on ONC 201 compassionate use trial (H3 K27 tumor recurrence). While our NO will most likely insist on just doing one-agent trial, I feel we should push for at least a consideration of adding another chemo to it. I think a combo of Avastin and Irotican could be reasonable - I read
that in mice, Avastin added to ONC 201 showed trifold efficacy. On the other hand , I am concerned about the long-term effect of Avastin. Any other ideas? I am just afraid to only stick with one gent. We can certainly just try to continue with CUSP 9 or medendazol.  Thanks!
Posted by Olga at 18:16 3 comments: